According to a recent Infratest survey, more than two thirds of all Germans are in fa-vour of biofuels. Even many sceptics would refuel using biofuels if they were guaran-teed sustainability.

Berlin, 21 March 2016. 69 percent of Germans rate biofuels as fundamentally positive. This was revealed in a representative survey by TNS Infratest. “More than two thirds of Germans approve of biofuels. Policy-makers can rely on this clear support from the general public and use biofuels for road transport to achieve the objectives of the Paris Climate Change Conference”, said Elmar Baumann, Manager of the German Biofuels Industry Association (VDB).

39 percent justify their positive attitude towards biofuels on the grounds that biofuel and bioethanol are more environmentally friendly than fossil fuels. “Biofuels reduce greenhouse gas emissions considerably. Depending on the raw materials, they cut down on between 60 and 90 percent of greenhouse gas emissions in comparison to fossil fuels”, states Stephan Arens, Manager of the Union for the Promotion of Oil and Protein Plants (UFOP). In order to achieve the highest possible reduction values, work is done at each step of the biofuels production chain to further optimise the processes. “The biofuels sector is a pioneer in the development of sustainable production processes - also in the agricultural sector. For this reason, biofuels are an important building block for the clean mobility of tomorrow”, said Arens.

According to the survey, only one in four is sceptical of biofuels. The primary reason for a negative stance is the use of agricultural commodities for the production of energy, which sceptics believe leads to famine. Petra Sprick, Manager of the German Association of the Oil Crushing Industry (OVID) in Germany, adds to this: “Biofuels neither have significant effects on global agricultural prices, nor do they restrict the supply of food products. Despite the growing worldwide biofuel production, agricultural prices have been very low and stores full for a long time now. On the contrary, with the production of biodiesel from rapeseed, 60 percent goes to scrap. This high protein animal feed is an important component of the animal refinement process and contributes to the protection of global food supplies. 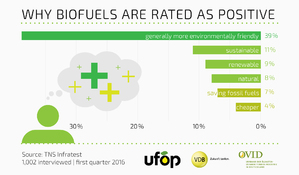 Approximately every second sceptic would refuel using biofuels if they were guaranteed sustainability. This has already become today's standard and has been required by law since 2011. For the production of biofuel, the raw materials may not originate from rainforest areas nor from ploughed green land: this has been effective since 01/01/2008. Independent auditors check that farmers comply with regulations and these auditors are in turn monitored by the Federal Office for Agriculture and Food. Since then, the biofuel industry has set standards that are also increasingly applicable to other sectors. The majority of Germans therefore deem biofuels to be not only environmentally friendly but also sustainable.

The representative survey by TNS Infratest was carried out on behalf of the following associations from the German biofuel sector: the Union for the Promotion of Oil and Protein Plants (UFOP), the German Biofuels Industry Association (VDB) and the German Association of the Oil Crushing Industry (OVID).