Berlin, 12th January 2016 – With 1.4 million tons, certified rapeseed oil continues to be the most important raw material source for the share of biodiesel in diesel fuel (B7). This is verified by the evaluation and progress report for the quota year 2014 published by the German Federal Office for Agriculture and Food in December 2015. In consideration of imported hydrogenated vegetable oil (HVO) from palm oil (336,000 tons), a total of approx. 2.4 million tons of biofuels were admixed to the diesel fuel in 2014. In contrast, palm oil or soya oil hardly play any part at all in the biodiesel economy (see fig.). 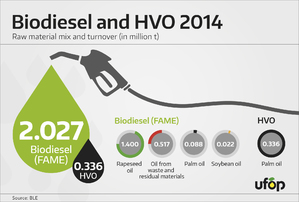 As the most important customer for the rapeseed oil produced in Germany, UFOP underlines the particular importance of the biodiesel industry. In view of low vegetable oil prices across the globe, the biodiesel market contributes significantly towards easing pressure on the market and stabilising producer prices for rapeseed. Unfortunately, the low-priced offer does not lead to growing sales in food use worldwide. The energetic use is thus elementary for the profitability of rapeseed cultivation. At the same time, the production of genetically unmodified rapeseed meal for animal feed is linked to the use of biofuel. UFOP underlines its concern that primarily soya cultivation in South America will profit from the expiry of the biofuel policy after 2020 because the dropped out rapeseed meal quantity has to be compensated by more imports. UFOP therefore emphasises the triple benefit of rapeseed as an important crop rotation element, as an oil supplier for energetic use and food use as well as the most significant domestic protein feed source