UFOP: the potential for reducing greenhouse gases is not being exhausted

Berlin, 18 May 2017. In its current evaluation of the sustainability certificates for the year 2016, the German Federal Office for Agriculture and Food (Bundesanstalt für Landwirtschaft und Ernährung: BLE) confirms increasing greenhouse gas efficiency in biofuels in Germany. The average GHG reduction compared to fossil fuels is 73 percent. There was an improvement in GHG reductions for all biofuel types compared to the year 2015. 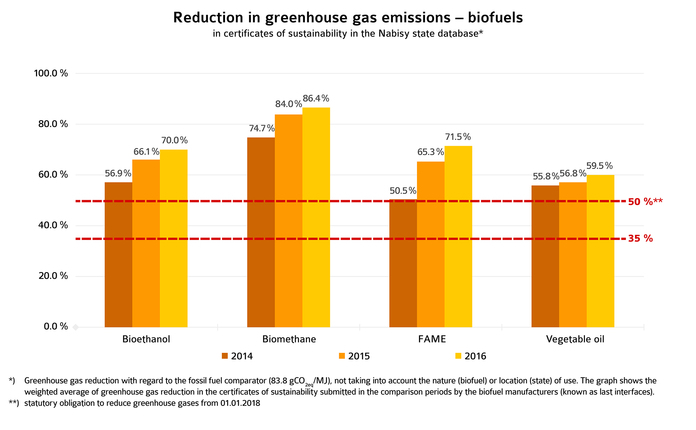 With regard to the current data, the Union for the Promotion of Oil and Protein Plants (Union zur Förderung von Oel- und Proteinpflanzen e.V.: UFOP) regrets that the potential for GHG reduction of biofuels as a contribution to the decarbonisation of the transport sector is still not being exhausted. This is because the demand for biodiesel is stagnating compared to 2015. As a result, the physical demand in 2016 remained unchanged at around 2.150 million tonnes, whilst diesel consumption increased to 35.75 million tonnes (previous year: 34.6) according to information from the German Federal Office for Economic Affairs and Export Control (Bundesanstalt für Wirtschaft und Ausfuhrkontrolle: BAFA). The actual share of biodiesel in the fuel market therefore dropped from 5.84 percent in 2015 to 5.68 percent in 2016.

The Union believes the reason for this development lies in the stipulated GHG quota of 3.5 percent for 2015 and 2016, which caps increased use of domestic biofuels because the physical demand for meeting the reduction requirement falls as a result of increasing GHG efficiency. UFOP expects that the quota for 2017, which has been increased to 4.0 percent, has also been set too low measured in terms of the usage potential. UFOP fears that this trend will continue to the detriment, above all, of biodiesel from rapeseed oil because the proportion of biodiesel from waste oils is stable or continuing to rise.

Germany’s solo effort is leading to more imports of biodiesel globally from used vegetable oils and waste raw materials. UFOP therefore strongly opposes an expansion of the raw material basis from animal fats. The Union emphasized that the existing regulation must be adhered to because there is already a need for increased exports of biodiesel from rapeseed and rapeseed oil. In addition, this shifting effect does not aid efforts to achieve the most resource-efficient climate protection solution possible.

Rather, an urgent national decision is required to stabilise the increase in the GHG quota up to a value of 6.0 percent in 2020 and for further development after 2020, according to the Union.

UFOP notes that the suggestions for redrafting the Renewable Energy Directive submitted by the EU Commission in November 2016 do not include any regulatory approach for promoting raw materials or GHG efficiency. However, according to UFOP, the key for greater climate protection in and by the agricultural sector as well as in the realm of bioeconomy lies in the competition for efficiency amongst biomass raw materials. Thus, UFOP emphasizes its position with reference to the consultations now starting in the European Parliament.

The BLE is responsible for implementing the sustainability criteria contained in Directive 2009/28/EC for promoting the use of energy from renewable sources (Renewable Energy Directive). With the Biofuel Sustainability Ordinance (Biokraftstoff-Nachhaltigkeitsverordnung: Biokraft-NachV) and the Biomass Electricity Sustainability Ordinance (Biomassestrom-Nachhaltigkeitsverordnung: BioSt-NachV), these criteria have been implemented in national law. The specifications of the sustainability ordinances apply to all operations across the whole manufacturing and delivery chain, meaning from the farmer to the body required to provide sustainability certification in the biofuels sector or the network and plant operators in the bioelectricity industry.