Despite Biofuels – Warehouses for grains, oil seeds and vegetable oil are overflowing 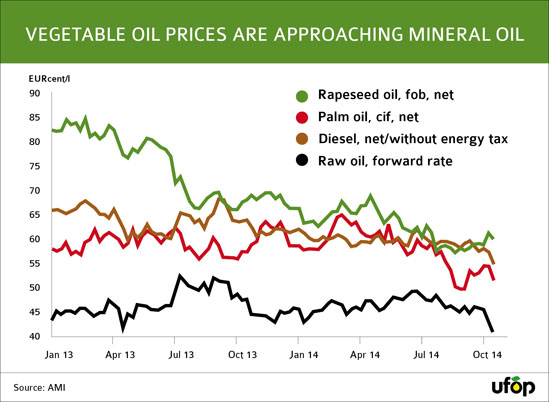 Berlin, 27/10/2014 – The Union for the Promotion of Oil and Protein Plants (UFOP) is following the current reporting regarding the situation on the most important agrarian raw materials markets with great concern. For months, the prices have been on a downward trend. The agricultural producers are feeling the impact of this development. Though a record-breaking average of 4.5 tons of rapeseed per hectare were harvested, but the surplus doesn't fully compensate the reduction in price as the UFOP has determined.

While the of rapeseed grain for animal food at low prices is continuing to decline, the price listing for plant oils on the international markets are starting to reach similar levels as those for raw fossil oil and diesel fuels. The European biofuel market with a revenue of approx. 11 million tons of biodiesel in 2014, and based on the estimation of the UFOP, the same will apply in 2015, is thus an important market buffer for absorbing these negative price developments. The price for rapeseed oil determines the producer price with more than 40% of it being raw material.

Despite the global record grain, maize and oil seed harvests, some non-government organizations never get tired of denouncing the biofuel branch and biofuel policies, criticizes the UFOP. According to the statement published by OXFAM, the federal government's increase of the greenhouse gas reduction obligation on January 1, 2015 from 3 to 3.5 percent would come at the cost of combating hunger and climate protection of the German biofuel branch. But, based on the excerpts of the resolution of the German Bundestag, the reader does not learn that the greenhouse gas reduction obligation was lowered for the years post-2017 by 0.5 to 4 percent and for the years post-2020, from 7 percent to 6 percent. The statement that the 0.5 percent increase corresponds with a cultivated area o 250,000 hectare reignites the imaginary tank v. plate debate. OXFAM has not released a statement regarding the negative price developments on the international agricultural markets. The price drop on the raw materials markets can be observed on the prices on the shelves at the supermarkets. The FAO, however, notes that in the past years agriculture in developing countries has profited from increasing foodstuff prices and invested in intensifying agricultural production.

The UFOP emphasizes that number of starving people, according to the FAO, has decreased to 805 million, measured against the global population of 7.2 billion people, but is still far too high. The supply of people with sufficient food is a human right and not a question of availability. The losses after harvest and in the warehouses in developing countries are still far too high and the percentage that ultimately ends up on the plate is far too low. Poor government leadership and the regional climate change which is more and more palpable, make the supply situation even more difficult, especially in the developing countries. Biofuels contribute toward not only buffering quantities and prices, but also in combating climate change, emphasizes the UFOP.

In Germany, rapeseed is cultivated on approx. 1.4 million hectare. Of those, approx. 1 million hectare of the raw materials produced are for manufacturing biodiesel. At a harvest quantity of approx. 6.3 million tons in 2014, approx. 2.5 million tons of rape seed oil respectively biodiesel and 3.7 million tons of rapeseed meal are produced. The latter, however, replaces more than 1 million hectare of soy bean cultivation in South America, as measured based on the protein quality. Food crops could be planted in these areas. The combined use of rapeseed for manufacturing rapeseed oil / biodiesel and feed protein makes thus raw material a highly economically-efficient producing culture in grain-rich crop rotations.