The cars of the future will also be powered by electricity. Even today, the proportion of hybrid vehicles, which have an electric motor and a combustion engine, is increasing (Plug-in Hybrid Electric Vehicles, PHEV). This affects refuelling habits, since the hybrid drive causes the effective fuel consumption to fall meaning fuel remains in the tank longer than before. The result: the fuel can age more. What’s more, in the future its composition may vary within existing standards because of the increasing admixture of synthetic fuel and biofuel such as biodiesel. This raises new questions about its usefulness in the case of long dwell times, sometimes exceeding six months, in the fuel supply system. 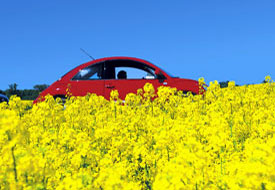 The still largely unknown interactions between fuel-carrying vehicle components and (ageing) fuel in PHEV vehicles is to be determined within the framework of a research project under close-to-real-life conditions (storage duration, storage conditions of the fuel). The Transferzentrum Automotive at Coburg University, Oel-Waerme-Institut GmbH and TEC4FUELS GmbH are conducting research into this subject together with support from the Research Association for Combustion Engines (Forschungsvereinigung Verbrennungskraftmaschinen e.V. - FVV), the German Society for Petroleum and Coal Science and Technology (Deutsche Wissenschaftliche Gesellschaft für Erdöl, Erdgas und Kohle e.V. - DGMK) and the Union for the Promotion of Oil and Protein Plants (Union zur Förderung von Oel- und Proteinpflanzen e.V. - UFOP).

With regards to fuel, in particular aged fuels and fuel blends of gasoline and ethanol/methanol or of diesel fuel and fatty acid methyl esters (FAME/Biodiesel), as well as alternative diesel fuels such as hydrogenated vegetable oil (HVO) and gas-to-liquid (GtL) are to be the subject of examinations. If serious interactions are observed that would impair the operational safety of PHEV vehicles, recommendations for action must be formulated. This is because it must be ensured that any possible interactions between alternative and/or aged fuels and fuel-carrying vehicle components will not cause failure of a component or seal and thus result in engine failure.

Announcement: Fuel quality development in particular for biofuels with a proportion of oxygen, such as biodiesel, in the context of changing power-train concepts is a central topic at the 15th International Conference “Fuels of the Future 2018” from 22nd to 23rd January 2018 in Berlin.