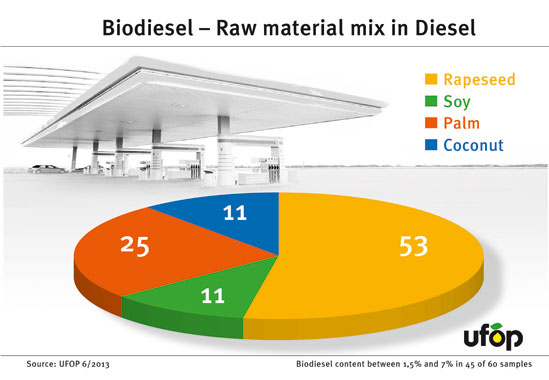 Berlin, 12.07.2013 – With 53 percent raw material content, rapeseed oil remains the most important raw material source for the production of biodiesel in Germany, followed by palm oil with 25 percent, coconut and soya oil with 11 percent respectively. This is the result of the study presented by the Union zur Förderung von Oel- und Proteinpflanzen e.V. (UFOP). 60 filling stations of mineral oil companies throughout Germany – weighted according to market shares – were sampled and the biodiesel component in the diesel fuel as well as its raw material composition were determined on behalf of the UFOP.

In the years 2010 and 2011, German agriculture benefitted from the fact that practically only certified rapeseed from domestic production was available after the immediate national implementation of the Renewable Energies Directive. The raw material mix now determined reveals that the certification systems approved by the EU Commission have now also been introduced in countries outside the EU such as Argentina, Brazil as well as Indonesia and Malaysia. In other words, the supply of sustainably certified raw materials for biofuel production has meanwhile become globalised, according to UFOP.

It is a stipulation of the international laws that market access may not be denied if the specified ground rules are complied with. Nevertheless, the UFOP has serious misgivings and believes that closer attention must be paid in respect to the quality of the national implementation and the certification introduced in the sense of fair competition, but also nature and environmental protection locally. The Renewable Energies Directive makes it possible to examine the quality of the sustainability certification. In contrast to all other utilisation options for biomass in the food or chemical industry, a statutory basis for sanctions exists here. Market access to the EU can be denied or the apportioning of imported biofuel quantities from countries outside the EU to the quota obligation can be rejected if the documentation as a prerequisite for compiling sustainability validations does not correspond to the requirements of the certification systems.

As this involves so-called voluntary systems, the UFOP urges the EU Commission to set out strict rules for the quality of the implementation and monitoring by the certification body as well as the responsible authorities of the member states. Thus, for example, a certificate of origin for the biofuels, beginning with the cultivation region, is possible without any problem thanks to modern satellite technology.

The study is available for downloading here.