From the field into the tank and back again

The comprehensive certification and documentation of biodiesel

According to legislation in effect since the beginning of 2011, biofuels can only be sold in the German market if it can be demonstrated that the energy plants from which the biofuel is produced were grown in line with the principles of sustainability. The “Biofuels Sustainability Ordinance” translates the EU directive into national law in Germany. The great deal of documentation and certification is to ensure that the biomass for the production of biofuel is not obtained, e.g., from slash-and-burn cultivation in rain forests. 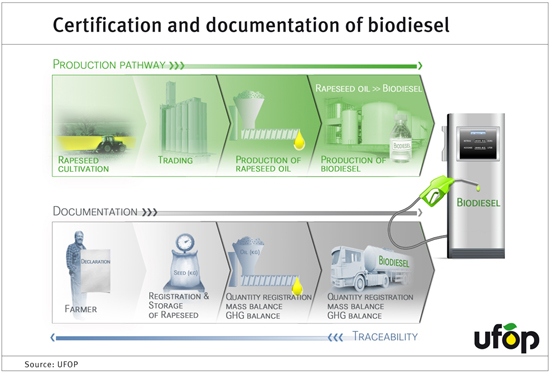 The above diagram illustrates the required documentation, which starts at the grower’s end. The grower sells the rapeseed to the agricultural trader and by issuing a so called producer declaration provides written confirmation that the rapeseed was grown in compliance with the sustainability requirements of the EU directive. The agricultural trader, in turn, documents the quantity of rapeseed received before he puts it in store. He also decides which producers will later be checked for the truth of the information supplied by them because at least 3% of the farms submitting a producer declaration must be checked.

The agricultural trader, upon selling the rapeseed to the oil mill, confirms whether the quantity sold was grown in line with sustainability requirements. The oil mill acts in the same way vis-à-vis the biodiesel producer. Then, the latter is entitled to issue the actual sustainability certificate. For this purpose, all data is entered in the "Nabisy" database of Bundesanstalt für Landwirtschaft und Ernährung (BLE). The sustainability certificate will only be issued if the data relating to the origin of the input material is in order and a greenhouse gas reduction of at least 35% is obtained. This means that, considering the entire production pathway, the combustion of the biofuel must release 35% less greenhouse gases than conventional fuel. This ensures that only biofuels are sold that make a real contribution to climate protection.

The proof of sustainability is needed, for example, by the fuels trader to claim tax reduction or have the appropriate amount of biodiesel set off against the so called fuels quota obligation. Under the Biofuels Quota Act, the mineral oil industry is obliged to sell a minimum quantity of biofuels. For this reason, the certificate is also checked by the competent customs authorities.

Hence, the way from the field into the tank is a long one; but it is documented and checked intensively and ensures that all biofuel can virtually be traced back to its origin.