Two thirds of Germans have a positive attitude towards biofuels, as shown by a recent representative survey. Almost half consider biofuels will be increasingly important for future climate change mitigation. Industry associations call for policies that adequately reflect these findings.

Berlin, 11.11.2020 – 65 percent of Germans have a fundamentally positive attitude towards biofuels. That was the outcome of a representative survey conducted by the Kantar market research institute on behalf of the biofuels industry. Provided that production is sustainable and that greenhouse gases are cut by at least 60 percent compared with mineral oil, almost 70 percent of respondents would use biofuels in their vehicles. 43 percent of survey participants expect biofuels to become increasingly significant in combatting climate change. 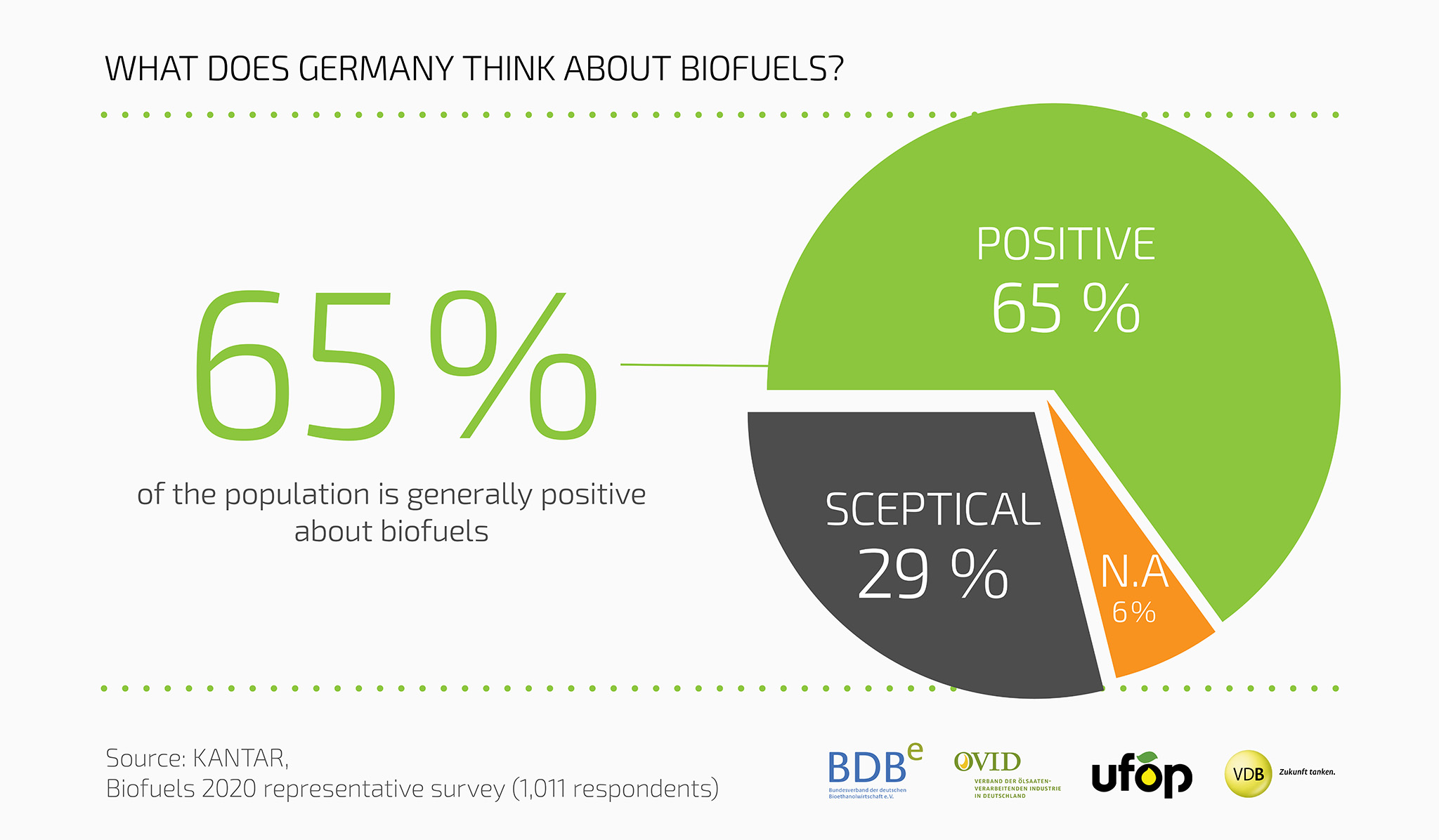 “If more than two thirds of Germans are in favour of biofuels, policymakers must take this into account and gear up the use of sustainable biofuels in road transport in order to achieve the climate targets. Most Germans see a mix of drive concepts as the best approach,” Norbert Schindler, Chairman of the German Bioethanol Industry Association, notes.

70 percent of all respondents, and even half of those with a sceptical stance, would fill up with biofuels provided these are certified as sustainable and guaranteed to reduce greenhouse gases by at least 60 percent. “Politicians must not ignore these significant data on public attitudes to transport policy and climate change,” Schindler underlined. Most of those surveyed view a mix of different drive concepts as the solution to climate protection issues in the transport sector: 49 percent consider that electric mobility will play a major part in reducing greenhouse gases. 43 percent believe that in five to ten years’ time biofuels will also become increasingly significant in combating climate change. Fuel cells with hydrogen are given a similar rating (46 percent) when considering the drive solution of the future. 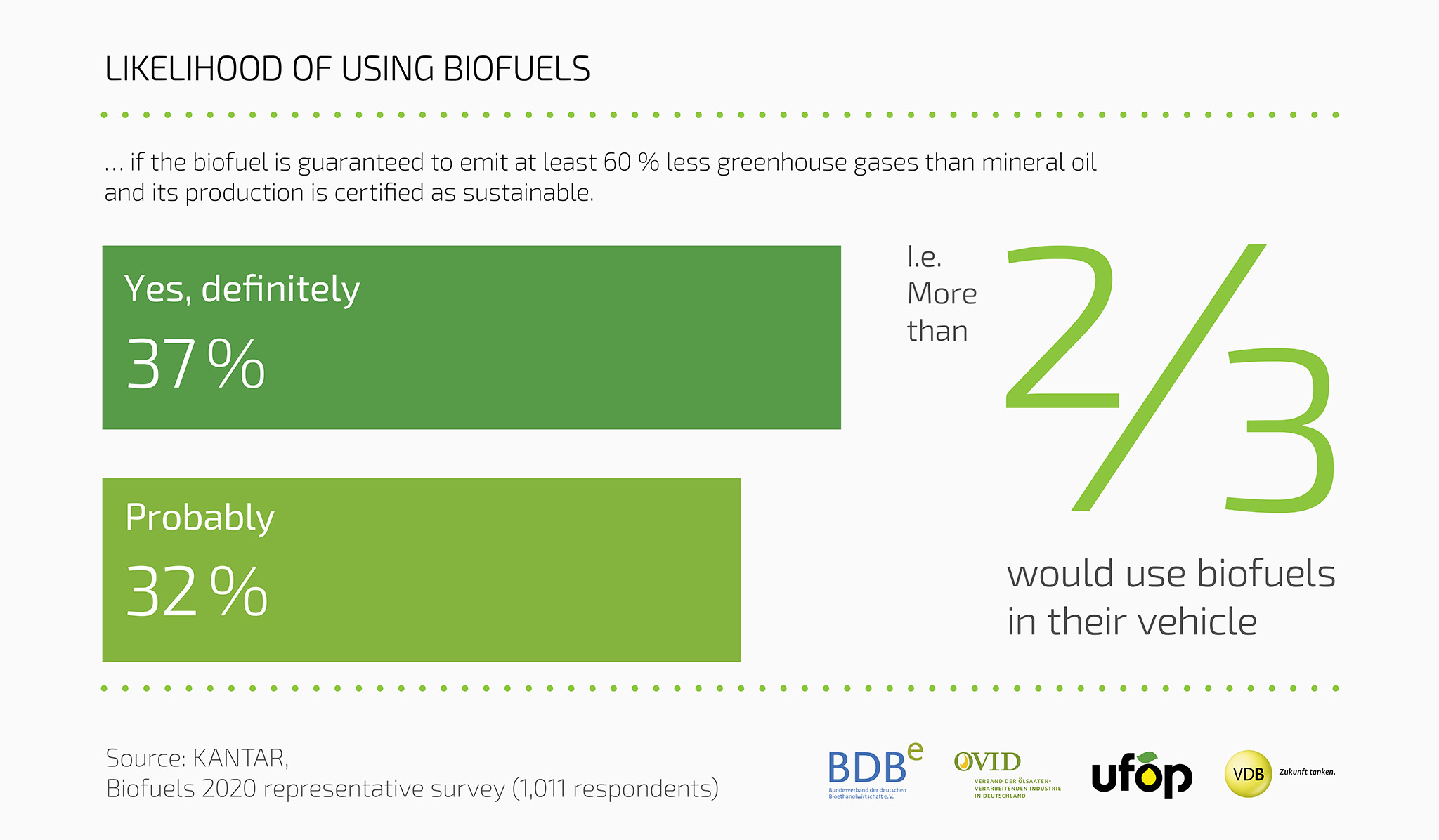 Protecting the environment and resources are cited in particular by Germans as the reasons for their positive perception of biofuels. Domestic feedstocks such as sugar beet (77 percent), rapeseed (75 percent) or fodder cereals (66 percent) were ranked particularly high. UFOP Chairman Detlef Kurreck emphasised that “the study confirms the particular importance of regional sourcing for public acceptance of cultivated biomass. Fodder cereals, rapeseed and sugar beet are grown for this purpose on some 850,000 hectares across Germany, making them an important alternative source of income for local farmers. The survey presented here confirms the nuanced appraisal of feedstock originating in Germany and the climate and environmental protection benefits.”

According to the survey, only a third of respondents are sceptical about biofuels. 24 percent are even keen to see higher admixtures of bioethanol or biodiesel. Many even call for 100 percent biofuel options. 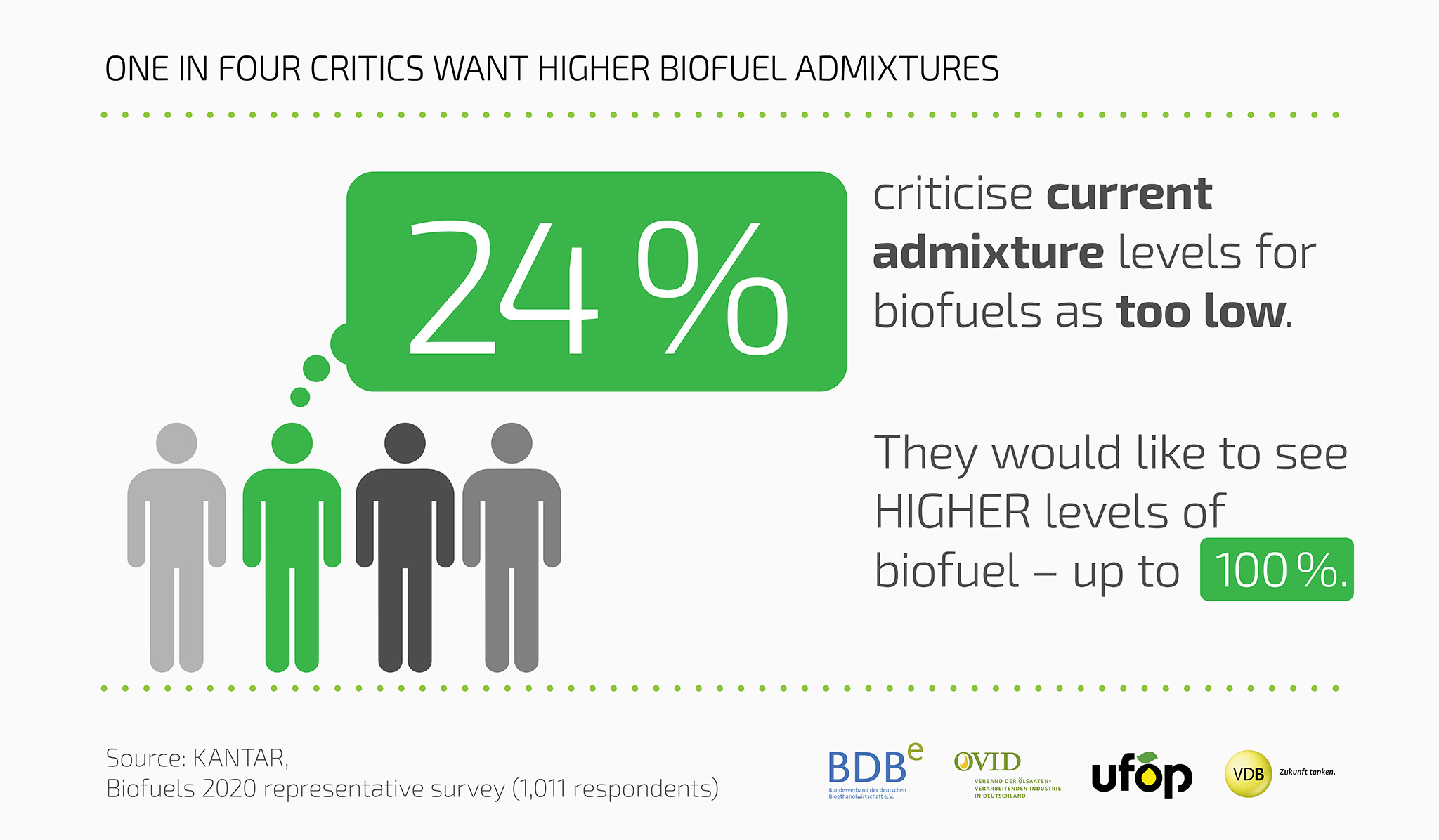 Certified sustainability as a pre-requisite for use of biofuels

Use of agricultural commodities for energy production is cited as the main reason for moderate use about these fuels, as sceptics believe this causes hunger. OVID-President Jaana Kleinschmit von Lengefeld underlines: “Nobody is starving anywhere in the world because we are cultivating rapeseed in Germany. On the contrary: consumers enjoy rapeseed honey and farm animals love protein-rich rapeseed meal. Human nutrition ultimately also benefits from the meat, milk or eggs those animals produce. We therefore urge policymakers to acknowledge the contribution biofuels make to climate change mitigation and the agricultural value-added chain and to take due account of this in measures for the national implementation of RED II.”

About one in two of those with a sceptical stance would use biofuels in their vehicles if sustainability was guaranteed. That is already standard practice today and has been a statutory requirement since 2011. For example, only biofuels with an officially approved sustainability certificate may be used, biomass processed into biofuels may not come from land that is deemed worthy of protection or that has been cleared, and the biofuel must make a significant contribution to cutting greenhouse gas emissions. The certified CO2 balance of renewable biofuels includes all emissions from land-use changes, fertilisation, fuel consumption during harvest, transport, distribution, production and during combustion in engines. Sustainable biofuels have thus proven their benefits in combatting climate change. 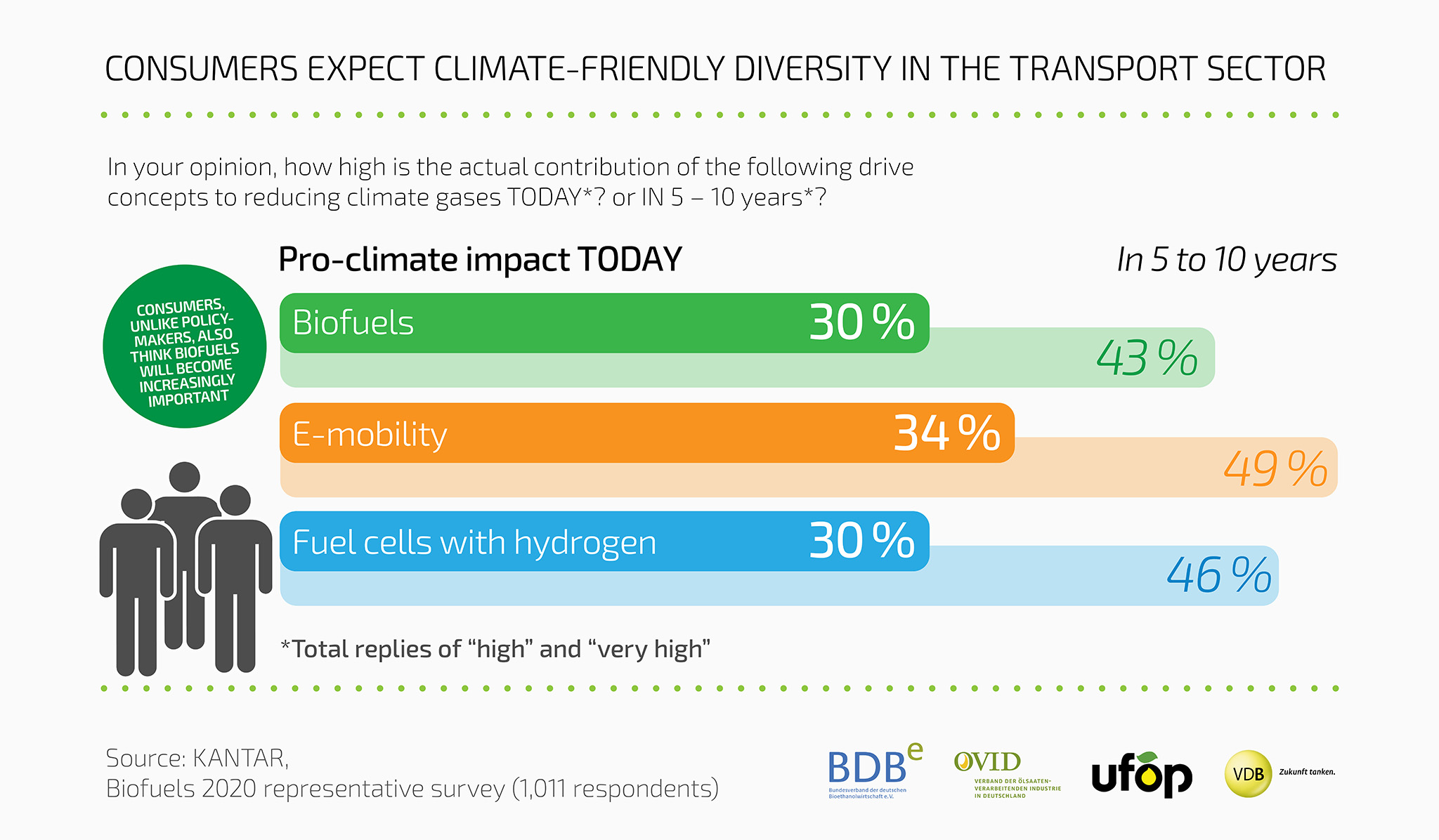 Four press graphics on the 2020 Biofuels Survey are available via a download link:
http://www.ufop.de/survey2020