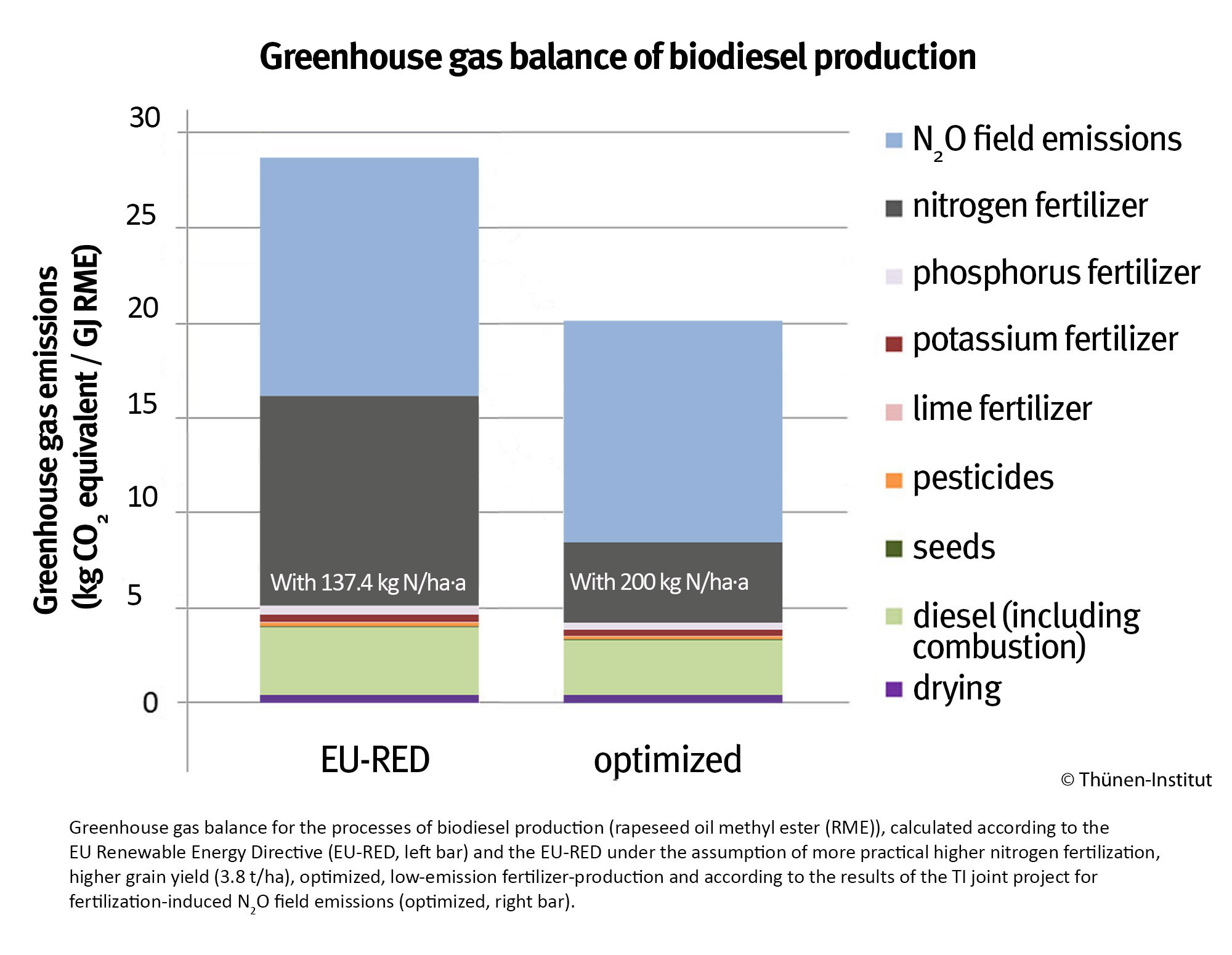 01.02.2018 – A network of eight partners, coordinated by the Thünen Institute of Climate-Smart Agriculture (Thünen-Institut für Agrarklimaschutz, hereafter TI), investigated greenhouse gas (GHG) emissions from the cultivation of rapeseed. The aim was to find out whether the emissions in the framework of climate protection agreements are estimated realistically for Germany. The result of the project: the nitrous oxide emission factor for GHG accounting in rapeseed is too high for German conditions.

Rapeseed is the most important energy crop for biofuel production in Germany. By far the highest GHG emissions in rapeseed cultivation are caused by field emissions of nitrous oxide and greenhouse gas emissions during the production of the required synthetic nitrogen fertilizer. These two emission sources should therefore be in the focus to ensure compliance with the requirements of the EU (RL EU 2015/1513). According to this regulation, biodiesel and other biofuels must save at least 60% (old plants: 50%) of GHG emissions compared to fossil fuels since 1.1.2018. For the GHG balance, biofuel manufacturers can use EU Renewable Energy Directive (EU) default values or regionalized information on resources such as fertilizer and fuel. The studies by the TI project team have now demonstrated that these values are unrealistic for Germany. The estimated amount of nitrogen fertilizer is too low, and the nitrous oxide emission factor is too high: Instead of the assumed 34 kg nitrogen per tonne of rapeseed, 50 to 56 kg nitrogen per tonne of rapeseed are common practice. The N2O emission factor is not 1.0 percent, but only 0.6 percent of applied nitrogen fertilizer. The scientists come to this conclusion by applying a new, more differentiated methodology according to Stehfest/Bouwman (2006). They call for future use of this method with realistic values so that the GHG balance of rapeseed biodiesel is not estimated to be worse than it actually is.

In addition, the researchers recommend replacing synthetic fertilizers with organic ones, for example, through digestates, which improved the GHG balance in the project when ammonia emissions were minimized. However, one potential problem is the risk of higher nitrogen surpluses. It is just as important to avoid nitrous oxide emissions and save energy in the production of synthetic fertilizers.

Finally, the researchers were able to show that in German commercial farming the rapeseed/wheat crop rotation compared to wheat/wheat saves an average of about 5 kg N/ha fertilization in wheat cultivation, and, despite this, a wheat yield increase of 5.6 dt/ha can be achieved. This pre-crop effect should be credited to the rapeseed. In general, a more holistic assessment, which looks at the entire crop rotation, is needed.

Overall, the researchers still see a need to study GHG balancing approaches as well as reduction of fertilizer use in practice. For this it would be helpful to label the purchased fertilizer with its specific GHG value. New approaches for application techniques and crop rotations could also further reduce GHG emissions.

Last but not least, the use of biofuels for cultivation and harvesting is an option for a better GHG balance of rapeseed production.

A publication in english language is freely available here.

The project was funded by the Federal Ministry of Food and Agriculture (Bundesministerium für Ernährung und Landwirtschaft, BMEL) through the Agency for Renewable Resources (Fachagentur Nachwachsende Rohstoffe e. V., FNR). In addition, it was co-funded by the Union for the Promotion of Oil and Protein Plants (Union zur Förderung von Öl- und Proteinpflanzen e.V., UFOP).