Germany is going ahead: The introduction of greenhouse gas quotas 2015 – new regulation requirements and consequences for the biofuel industry

Germany, observed by other member states, will change the commitment framework from an energy based quota (currently 6.25 %) to a stepwise increasing greenhouse gas reduction commitment. In October this year the German parliament (Bundestag) decided – 2015: 3,5%; 2017: 4,0%; from 2020: 6,0%. These increasing GHG-reduction commitments have to be fulfilled by the petrol companies (owner of tax warehouses). Not only the big companies of the petrol industry also the small traders, are concerned.

Parliament and Government are very late concerning this decision and the announcement about the detailed regulations and documentation requirements which have to be taken into account. In the meantime the responsible administrations (customs authorities, the Federal Institute for Agriculture and Nutrition (BLE)) have to be prepared concerning the collecting of the data e.g. via the data bank “Nabisy”. Finally the biofuel-quota-office has to figure out, whether the petrol companies have fulfilled the GHG-quota commitment, otherwise a penalty has to be paid: 470 EUR/t CO2. The deadline for corrections is the 15 April of the following year. Biofuel amounts which are not used in 2014 can transferred with an average CO2-value of 43.58 kg/GJ, corresponds to 48% GHG-reduction or nearly of the 50% GHG-reduction requirement in 2017. But the obliged companies have to accept comprehensive reporting requirements: total amount and each type of fuels with a declaration of the origin of purchase and provenance, GHG-emissions of each energy unit. The responsible office is empowered to check the reports and information.

What are the consequences of this national solo attempt?

The competition begins between the crops with the best greenhouse gas value on the stage of the production (see the differences in fig. 1). The “looser” will be rapeseed due to the relatively high standard GHG-value (30 g CO2/MJ). Therefore UFOP recommends that farmers should fill in the self-declaration, which are sent to the first collectors (e.g. agricultural cooperatives), the regional NUTS2-greenhous gas values. An advantage of 4g – 5g CO2/MJ compared with the standard value is possible (fig.2).

Naturally the petrol companies will prefer biofuels with the best CO2 saving/cost ratio. Depending on the quality requirements, the Cloud-Filter-Plugging-Point (CFPP)-value will be the bottle neck concerning the raw material composition during the time period of November – February, which is already the case based on a survey at public filling stations, commissioned by UFOP in 2013 (fig.3). Due to the fact that currently the prices of soy, palm and rapeseed oil have narrowed on a very low price level the German and European biofuel industry will currently (!) prefer rapeseed oil instead of palm oil. This situation will change at the latest in spring next year (less rape seed oil demand to ensure the “winter CFPP-value”). In the case of the introduction of 3.5% in 2015 UFOP expects a sharp reduction in the biodiesel demand. Depending on the CO2 reduction efficiency down to 1.3 Mio. Tons – the range will be: 1.6 to 1.3 Mio. Tons. When the draft of the law had been released, UFOP demands an increase to 4.5% and caused an intensive discussion between the biofuel sector, petrol industry and the government about the biofuel demand. The problem is, that different estimations lead to different results concerning the total biofuel demand, which is limited by the “blend walls” (B7, E5 and E10 – market share of E10: 20%) and the GHG-efficiency of the biofuels. The petrol industry assumes about 55% GHG-reduction whereas the biofuels industry estimates up to 65% (fig.4). Therefore the biofuel industry suggested that the government has to report already in 2016 about the experiences in 2015 with the aim probably to adjust the quote commitment. On the other hand a sudden increase of 4.5% in 2017 will rise discussions about the limitations caused by the blendwalls.

The Biodiesel producers will come under pressure due to the new competition framework. The greenhouse gas saving competition will take place first of all on the stage of the Biodiesel producers. Here is given the crucial GHG reduction potential: options to optimize the energy and raw material input. This competition has already begun. Not only German biodiesel producers are already certified, also companies abroad with already astonishing CO2 savings are entering the greenhouse gas quota market. The national law foresees that the acknowledged certification systems are empowered to check specifically these declarations of biofuel producers to avoid an unfair competition. In this context intensive discussions between the responsible Federal Ministry of Environment, UFOP and the Biofuel Associations have taken place concerning the prolongation of the stronger certification requirements for biofuels made from waste oil (36. BImSchV) and also concerning the general quality of the certification process due to unreproducible CO2 saving declarations. But with the introduction of the GHG-reduction commitment the double-counting option is running out and consequently the legal basis of the strong certification requirements referred to the 36. BImSchV-ordinance. One of the key issue will be the question how to qualify the certifiers of the certification bodies. The certification systems have to accelerate and organize the qualification and to adjust the requirements (check lists). Generally it has to be ensured that comparable greenhouse gas values, depending on the crop or biomass raw material and the corresponding specific biofuel production technology are results of the certification process as a precondition for a fair competition in the future. 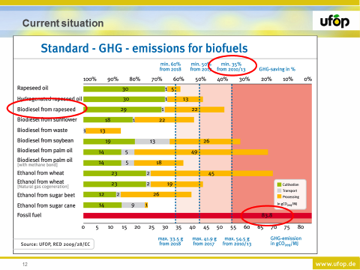 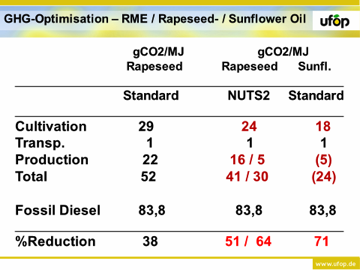 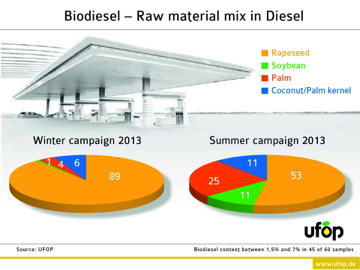 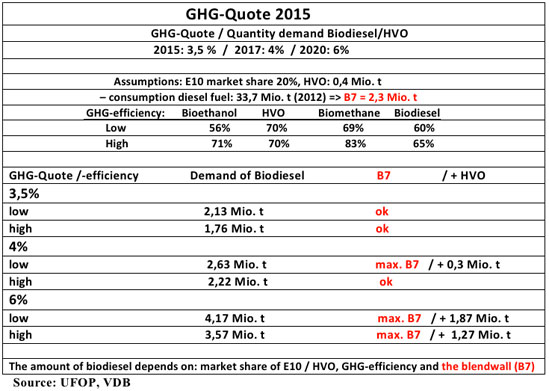