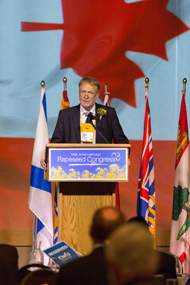 Saskatoon, 9th July 2015 – On the occasion of the 14th International Rapeseed Congress in Saskatoon, Canada, Professor Wolfgang Friedt of Gießen University was awarded the Eminent Scientist Award for his lifework in rapeseed breeding research. With this prize, the Groupe Consultatif International de Recherche sur le Colza (GCIRC) honours distinguished scientists in the field of rapeseed research during their congress which is held every four years.

After Professor Gerhard Röbbelen of Göttingen University, Wolfgang Friedt is the second German scientist to be awarded this prize. In his laudation at the presentation of the award in front of more than 900 participants, Dr Martin Frauen, Member of the GCIRC Board, emphasized the commendable work of Professor Friedt in the field of rapeseed breeding research including genome analysis and made reference to several pioneering projects. These included collaborative projects funded by the German Federal Ministry for Research, such as NAPUS 2000, GABI-GARS and GABI-Canada, which aimed at establishing German-Canadian research cooperation.

During his career at Gießen Universtiy, more than 100 students obtained their doctorates under Professor Friedt’s supervision, 30 in the field of rapeseed research. To this day, Wolfgang Friedt therefore has good contacts with a comprehensive network of scientists, both nationally and internationally. With his expertise, Professor Friedt has initiated and evaluated research projects funded by the Union for the Promotion of Oil and Protein Crops (UFOP) as Chairman of the Advisory Board since 2002. This role also included appointing the German delegation for this congress. With the support of UFOP, young scientists in particular were enabled to participate and present the results of their research in the 14th just like earlier GCIRC congresses.

The 15th International Rapeseed Congress 2019 will take place in Berlin directed by UFOP. The GCIRC Board has denominated Professor Friedt as incoming President.