Berlin, April 23, 2013 – On Pentecost, over 200 race cars will start at the traditional ADAC 24-hour race on the Nürburgring's legendary Nordschleife track. With over 200,000 visitors, it is the largest motor sporting event of the year. Also present this year is the prominent musician Smudo, who replaces his three Fantastic Four bandmates for 24 hours with three racing colleagues. These are the TV test driver Tim Schrick, team manager and former DTM driver Thomas von Löwis of Menar and rookie driver Aris Varvaroussis. This quartet of drivers is not the only focus of attention, but also the vehicle used by them, a Volkswagen Scirocco, which was developed into a bioconcept car. Smudo presented the race car, which was equipped with innovative rapeseed-based biofuel and constructed from biocomposites and biopolymers, together with his team colleagues and the Union for the Promotion of Oil and Protein Plants (UFOP) on April 23rd exclusively in Berlin.

The venue was the Potsdamer Platz, where the car, baptized by fans as "BioRocco", attracted inquisitive glances while standing next to the replica of one of Germany's first traffic lights. 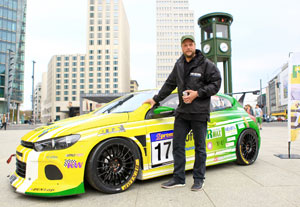 For Smudo, this is his twelfth start at this long distance classic race, dubbed the "green hell", which places great demands on both man and materials. In eleven of these races, both Smudo and team manager von Löwis of Menar have relied on RapsPower. "Over the past ten years, we have shown that racing and sustainability are not mutually exclusive. With the use of biomaterials and various rapeseed oil-based fuels, from pure biodiesel, to B30 blends, to the currently used blends made from HVO and RME, we have always demonstrated a pioneering spirit in terms of green racing," says Smudo.

This year, the Four Motors team at the ADAC 24-hour race relies on "Diesel-renewable", a 100-percent biofuel that consists almost entirely of hydrogenated rapeseed oil (HVO) produced by the Finnish company Neste Oil under the NExBTL brand name. This HVO fuel is used not only in cars and commercial vehicles, but also has demonstrated its performance and reliability in well over 1,000 Lufthansa flights between Frankfurt and Hamburg. Moreover, this year the team is involved in a fuel research project where the so-called "Rmax" biofuel is subjected to intensive bench tests. This Rmax blend is composed of equal parts of rapeseed methyl ester (biodiesel) and rapeseed oil-HVO. What makes the Rmax blend used in the bioconcept car so special, according to team manager Tom von Löwis of Menar, is its DIN conformity. "Our fuel exceeds practically all parameters of the DIN EN 590 diesel standard. We only deliberately exceeded the prescribed maximum limit of 7 percent biodiesel for normal Diesel in order to demonstrate how great the technical potential of this kind of biofuel is," says the former DTM driver. 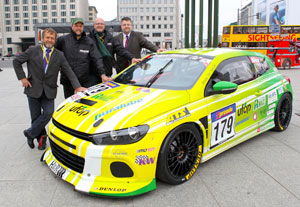 For Smudo and his driver colleagues, the use of biofuels is tied to a clearly defined requirement. The sustainability of the raw materials used must be guaranteed. This is why, for over ten years, the team has been working together with the agricultural association, UFOP, which launched and accompanied the rapeseed oil-based fuels into the German market. Association president Wolfgang Vogel on this collaboration: "It is well known that biofuels can be produced from a variety of agricultural commodities, which is not always unproblematic in terms of their sustainability. For this reason, Smudo's team looked for a way to exclusively use biofuels based on domestically grown rapeseed. We, as representatives of all German farmers, companies and organizations involved in the production, processing and marketing of rapeseed, can ensure this. The sustainable production of rapeseed in this country is guaranteed because the entire German rapeseed production is certified as sustainable. The entire production chain is recorded and documented in its various stages. This makes it possible to trace the rapeseed oil's point of origin and processing path up to the rapeseed fields of our farmers.

Visit www.fourmotors.de and www.ufop.de for more information on the bioconcept car and this year's implementation at the ADAC 24-hour race on May 19 and 20, 2013. The official race website is www.24h-rennen.de.