Berlin, 7 February 2014 – At 89 %, rapeseed oil is, as expected, the most important raw material of the biodiesel component in diesel fuel, followed by palm kernel oil at 6 percent and palm and soya oil at 4 and 1 percent, respectively. This is the result of the renewed investigation of the raw material composition of diesel fuel at public filling stations commissioned by the UFOP (Union zur Förderung von Oel- und Proteinpflanzen e.V. – Union for the Promotion of Oil and Protein Plants). 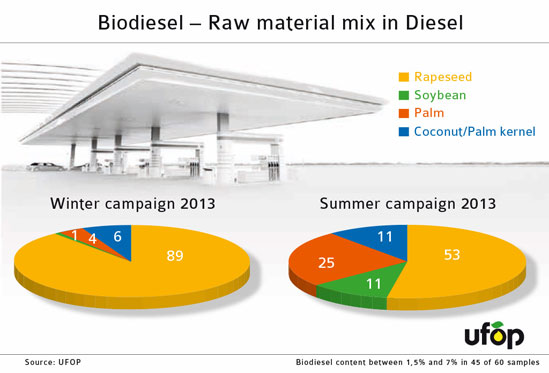 Analogous to the UFOP study in summer 2013, 60 fillings stations belonging to mineral oil companies throughout Germany were sampled at the end of November 2013. The biodiesel content in the diesel fuel, its raw material composition and the content of hydrated vegetable oil (HVO) were determined in these tests. Compared with the first investigation, the proportion of diesel fuel samples without biodiesel has increased from 20 to 25 percent, and with it also the use of HVO. In contrast to biodiesel, hydrated vegetable oils can be chemically adapted to the requirements of winter quality during production. Owing to the analysis method used, however, no immediate conclusion on the raw material composition can be reached.

As yet, there is also no analytical method for the detection of used waste oils or animal fats in biodiesel. Therefore, an estimation of the fraction of biofuels eligible for double counting was not possible during this study. To prevent any possible cases of fraud, UFOP therefore once again demands the retention of the strict certification requirements in Germany in comparison to other member states, also if the greenhouse gas quota is introduced from 2015. Furthermore, UFOP sees the need for an evaluation in the greenhouse gas calculation of biofuels from waste oils and residual material based on current studies of the German Research Centre for Biomass (Deutsche Biomasseforschungszentrum – DBFZ). These raw materials should not be included per se in the greenhouse gas calculation with a starting value of 0 gCO2/MJ, thus distorting competition.

UFOP has established that the high content of rapeseed oil in the biodiesel sampling is attributable not least to the decline of the rapeseed oil price after the 2013 harvest. According to information from the Agricultural Information Service (AMI), at the current price of 700 EUR per ton, a price level has been reached at which the processing of imported palm oil (638 EUR/t CIF Rotterdam – see UFOP market information "Oil Seeds and Biofuels" 02/2004) is not necessarily economical. Furthermore, the levying of punitive duties on biodiesel against Indonesia and Argentina has a decreasing effect on the imports from these countries. The increased demand from the domestic and European biodiesel industry for European rapeseed oil has, however, not yet been able to bring about a positive change of direction in the rapeseed oil price, the reason obviously being the huge worldwide supply quantities of vegetable oils.

The current Filling Stations study can be downloaded here.