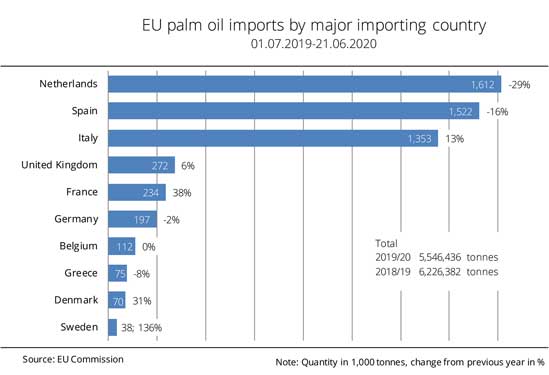 The EU member states plus UK imported somewhat less palm oil in the marketing year that has now nearly ended than a year earlier. The Netherlands and Spain saw especially steep declines in imports.

Spain imported the second largest amount of palm oil to the EU, despite a 16 per cent decline compared to 2018/19. By contrast, Italy raised its palm oil imports 13 per cent. The 38 per cent growth in palm oil imports to France, to 0.234 million tonnes, is especially noteworthy.

The Union zur Förderung von Oel- und Proteinpflanzen (UFOP) has welcomed the general decrease in palm oil imports. The association attributes this trend mainly to the decline in using palm oil in biodiesel fuel and hydrotreated vegetable oil (HVO) production. UFOP expects palm oil imports to decrease further as a consequence of the implementation of the delegated decree to implement the sustainability requirements for biomass with high or low iLUC risk. According to the association, the pace of the decline is going to depend on each member state's level of ambition to end the use of palm oil. Nobody has to wait until 2030.

UFOP has pointed out the unsatisfactory quality of data in the official statistics of the EU Commission and member states and called for the EU database announced in the Renewable Energy Directive (RED II) to be created as soon as possible on the lines of Nabisy, the database system of the German Federal Office for Agriculture and Food (BLE). Companies would then be required to keep records of feedstock types and origins for traceability. This would be the best way to avoid potential double crediting and fraud. Noting the international importance of complying with the requirements for sustainable production of agricultural feedstock, UFOP has emphasised the pioneering role biofuels from cultivated biomass are playing for other economic sectors.

Field bean area on the increase 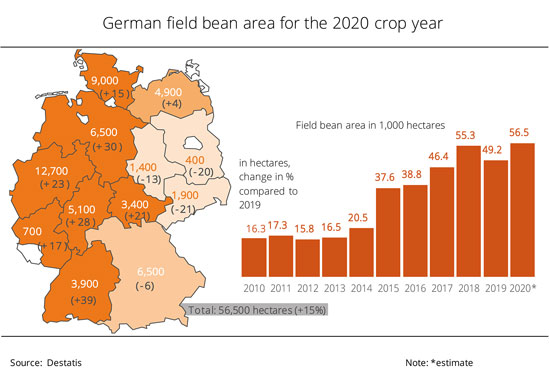 German farmers planted a larger area of land with field beans for the 2020 harvest. Especially in Baden-Wuerttemberg, the area has been considerably expanded.

According to information published by the German Federal Statistical Office, the area of land in Germany devoted to growing field beans for the 2020 harvest amounts to around 56,500 hectares. This translates to a 15 per cent increase year-on-year and sets a new record. In other words, the field bean area has more than tripled over the past ten years. The largest area is found in North Rhine-Westphalia, as it was last year. It comprises 12,700 hectares, which is an increase of 23 per cent. The German state with the second largest field bean area is Schleswig-Holstein, with 9,000 hectares under field bean production. This translates to an expansion of 15 per cent compared to the previous year. However, the biggest expansion in area is seen in Baden-Wuerttemberg, where the field bean hectarage rose 39 per cent to 3,900 hectares. Farmers expanded their field bean areas also in many other German states.

According to investigations conducted by Agrarmarkt Informations-Gesellschaft (mbH), declines in area have been recorded in Brandenburg, Saxony, Saxony-Anhalt and Bavaria. The strongest drop is seen in Saxony, where the area dwindled 21 per cent to 1,900 hectares. Brandenburg has the smallest area under field bean cultivation. Its area shrank 20 per cent to 400 hectares. 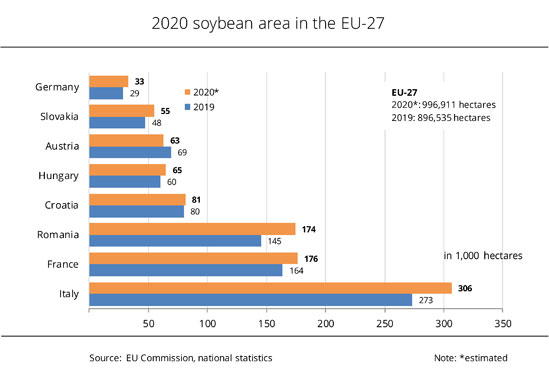 Soybean production in the EU-27 continues to grow further in 2020. The reason is significant increases in area in the most important EU member states.

According to information published by the EU Commission, soybean production in the EU-27 more than doubled over the past ten years. The area planted with soybeans in 2020 is reported to amount to almost 1 million hectares. This is up around 11 per cent year-on-year. Italy, with a soybean area of presumably 306,000 hectares and a 12 per cent increase in area, is likely to remain the by far biggest soybean producer of the EU-27. This means that the country retains its share of around one third of the total soybean area in the EU-27. The soybean area has also been significantly expanded in other EU member states. Romania has recorded an increase of 20 per cent to 174,000 hectares, whereas Slovakia has seen a 15 per cent rise to 55,000 hectares. German farmers also dedicated more land to soybeans than they did the previous year. 33,000 hectares translate to a 14 per cent increase. Only Austria has recorded a 9 per cent decline to 63,000 hectares because of excessively dry conditions at the time of sowing.

According to investigations conducted by Agrarmarkt Informations-Gesellschaft (mbH), the soybean harvest is also likely to increase because of the expansion in production area in many EU countries. Germany did not harvest any significant amount of soybeans until 2016. This year, the EU Commission expects the country to harvest 91,000 tonnes. This would mean a doubling of German production over the past four years. Romania is assumed to see the biggest increase, of more than 20 per cent to 454.000 tonnes. A decline is only expected in Austria due to the reduction in area planted.

The Union zur Förderung von Oel- und Proteinpflanzen (UFOP) views this development as confirmation of the general willingness of farmers to further expand the production of grain legumes. Depending on site conditions, grain legumes are a key crop to complement crop rotations for more sustainability and climate resilience. UFOP has noted that in the EU Commission's "Farm to Fork" strategy, this aspect is rightly a key aspect for creating regionality and adding local value. These crop rotation systems should also include rapeseed and sunflowers as additional flowering plants alongside grain legumes.

All in all, these crops contribute to improving biodiversity through different flowering times, soil quality through enrichment with humus and carbon, and climate protection through fewer nitrogen applications because of the nitrogen fixation capacity of grain legumes. The association has stressed that the cultivation of grain legumes contributes to producing GM-free feed and/or food protein, thus cutting the need for protein imports from non-EU countries.

UFOP therefore expects that the comprehensive ecosystem service approach will find its way into the aims of the agricultural strategy of the German Ministry of Agriculture. UFOP considers this to be a necessary requirement for ensuring that locally adapted crop rotation systems can also contribute to economic sustainability on arable farms. However, the association has pointed out that, in the end, consumers decide at the point of sale whether, and to what extent, extended crop rotation systems that provide the desired ecosystem service are also rewarded. 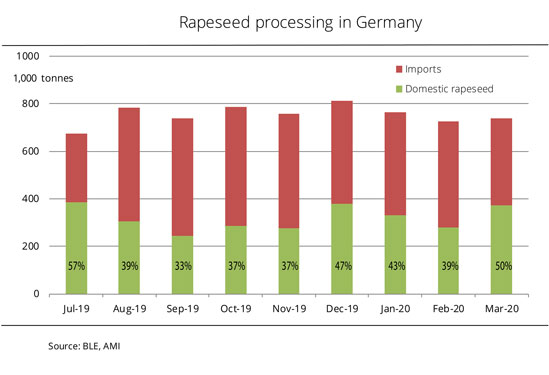 According to figures published by the German Federal Office for Agriculture and Food (BLE), German oil mills processed more rapeseed in March than they did in February 2020. The total is reported at 737,000 tonnes, up approximately 10,000 tonnes from the previous month. However, it is not so much the tonnage as the origin of rapeseed processed that is noteworthy. According to calculations made by Agrarmarkt Informations-Gesellschaft (mbH), around 50 percent of the processing volume was sourced in Germany. This translates to a rise of 11 percentage points from the previous month. It is also the largest share of German rapeseed in total processing since the beginning of the crop year in July 2019, when it amounted to around 57 per cent due to the high availability of new-crop rapeseed. In the months that followed, German rapeseed processing was primarily based on imports. As a consequence, the use of domestic batches declined to less than 40 per cent between August and November. Rising rapeseed prices from December 2019 onwards stimulated sales of rapeseed from German producers, which led to a jump in domestic rapeseed processing to 47 per cent.

Between July 2019 and March 2020, German oil mills processed 6.8 million tonnes of rapeseed, 42 per cent domestic and 58 per cent non-domestic. In the same period a year earlier, processing amounted to 6.7 million tonnes, 41.5 per cent of which was from domestic production.

In view of these figures, the Union zur Förderung von Oel- und Proteinpflanzen (UFOP) has pointed out that Germany is by far the most important oilseed-processing country in the EU. The key factors determining the amount of rapeseed required are demand for rapeseed oil for German biodiesel producers and the national protein animal feed market. UFOP has underlined that this demand also contributes to the diversity of crops in terms of more diversified cereal crop rotations, thus enhancing biodiversity and ecosystem services in other EU countries as well as non-EU countries such as Ukraine.

More sunflowerseed in the EU-27 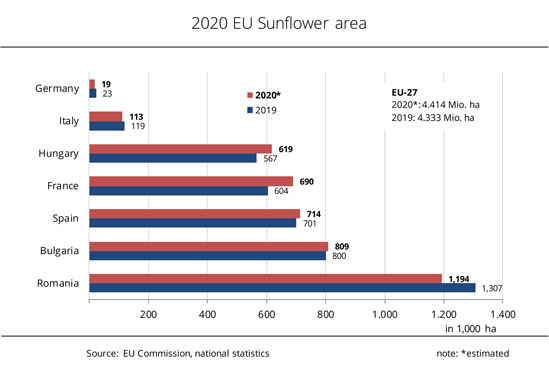 Although the sunflower area in Romania, the largest sunflower producer in the EU-27, is expected to decline compared to the previous year, the EU Commission projects an increase in overall output in the EU.

According to an EU Commission forecast, the EU-27 sunflower area to be harvested in 2020 will likely be around 4.4 million hectares. This would translate to an around 81,000 hectare increase year-on-year. In the April forecast, the Commission still expected a decline. The sunflower area in Romania is seen to have slumped 9 per cent to 1.2 million hectares. Nevertheless, the country remains the largest producer in the EU. The sunflower hectarage in Italy and Germany is also presumed to shrink compared to the previous year, by 5 per cent and 19 per cent respectively. By contrast, Bulgaria, Spain, France and Hungary are expected to see significant expansions in sunflower area in some places. According to an interpretation of the EU Commission's statistics provided by Agrarmarkt-Informations Gesellschaft (mbH), France is projected to see a particularly sharp increase. The French sunflower cultivation area amounts to 690,000 hectares, which is up 14 per cent year-on-year.

The EU Commission anticipates yields to hit 23.4 decitonnes per hectare (up 1.2 per cent year on year and 4.4 per cent above the five-year average). Consequently, EU sunflower production is likely to total up to 10.3 million tonnes due to the larger area sown. The anticipated decline in Romania will be more than offset by expectations of significantly larger crops in Slovenia, France and Bulgaria.

Please find further Charts of the week in our archive.